Time to butcher these 5 myths about fake meat

And maybe these facts will bring meat eaters and vegetarians closer together again.

After boycotting McDonald’s for 20+ years I had to try the new #mcvegan. And then there were #cinnamonrolls at the uni. Both really good. So hard being vegan, have to eat all the time 😂 🍔🍩🍟🍰🍕🍦

Such was one of the numerous Find the original Instagram post reactions on social media to the fast-food chain’s seven-week long experiment of offering customers a vegan burger. The experiment runs from 4th of October to 21st of November 2017. Afterwards McDonald’s will decide whether they will bring the McVegan to more restaurants.

McVegan at McDonald’s, tofu curried sausage at Aldi and vegetarian cold cuts from Rügenwalder – replacement products for a Maren Urner describes the menu that saves the world meat-free nutrition have found their place in society. But We all climb peak ignorance every now and then, according to Han Langeslag and Maren Urner prejudice and a poor understanding of veggie sausages and burgers are still rife. How accurate are the five most common preconceptions?

»You can explore culinary culture all over the world and you will find the popular dishes always contain the same 2 ingredients.«

Co-founder of »food lab muenster« The »food lab muenster« is a project of the Fachhochschule Muenster and was inspired by a visit to Copenhagen, where the Nordic Food Lab sits. Here, the nutritionist Guido Ritter and Tobias Sudhoff got the idea for an interdisciplinary team to look for sustainable ways of eating. and Tobias Sudhoff’s book »Ein Herd und eine Seele« (»One stove, one soul«, German) cookery-book author who looks at the molecular structure of what we eat, Tobias Sudhoff says a pizza, grilled steak or Cantonese street food Cantonese street food is mostly made from onions, soy beans and tomatoes in combination with fish, pork or chicken. Its characteristic flavour comes from ginger, ricewine and soysauce. have more in common than might meet the eye. »It’s always roasting aromas produced by the This video shows how sugar and amino acids make for the special aroma (German, 2014) Maillard reaction and glutamates.« Glutamat is a flavour enhancer that is often used in fast food restaurants and convenience food. It makes us taste umami, one of the 5 basic tastes our tongues can distinguish.

Their scents and tastes – especially the grill aroma – have been triggering reactions in our brains since time immemorial, and they tell us to tuck in! In order to create the same reaction with plant-based foods, it’s imperative to get the consistency and the taste right.

In the case of the first, researchers at the University of Wageningen in the Netherlands made a Read more about the NOS' plans on how to go on (Dutch, 2017) breakthrough that caused an international splash in 2015. The grill aroma has been triggering reactions in our brains since time immemorial, and they tell us to tuck in! Their Shear Cell Technology turns beans, peas and lentils into steaks, which in terms of structure are hard to differentiate from a real T-bone steak. The next phase of development is Learn about the process in this video (English, 2017) currently underway: They are now working with 8 companies That includes Unilever and Givaudan, currently the world leader in the production of aromas and flavours. to give the plant-based steaks the necessary flavour, with a view to launching within the next 4 years. One of those involved in the project is Jaap Korteweg, whose reputation as »The Vegetarian Butcher« Jaap Korteweg , son of a butcher and the first vegetarian butcher worldwide, is convinced that the only reason why people eat meat is its taste. If all people reduced their usual 5 portions of meat per week to 2-3 times per week, eating plant-based alternatives instead, our climate would be helped a lot. now stretches beyond the boundaries of his native Netherlands.

Simultaneously, customers taking part in blind tastings thought plant-based burgers served by US companies Website of »The Impossible Burger« »The Impossible Burger« and Website of the »Beyond Burger« »The Beyond Burger« were made from meat. Jaap Korteweg’s vegetarian tuna salad and Jus Jus is French for juice and is used for a concentrated, fat-reduced meat-sauce. produced by German gourmet chef Stephan Hentschel have scored similar successes among tasters unaware of the real content of what they were eating.

Conclusion: Plants can replicate the components that make meat so irresistible.

One of the leading ingredients in most replacement products is soy. The bean contains a lot of protein, Our bodies do not absorb all kinds of proteins equally well, but in general plant-based proteins are being well digested. all essential amino acids and a lot more nutrients – for all of which it is used as livestock feed and an ingredient for meals.

Often, however, on the ingredient list soy is being followed by a long list of additives including spices, flavourings and colourings – just like with most convenience products. It is common knowledge that they contain less nutrients than fresh products and a lot of salt and sugar. In that aspect, it makes little difference whether they contain meat or carry a green »vegan« label.

As is so often the case – and not only with nutrition – the optimal solution probably lies somewhere in the middle. In general, in the context of nutrition that means: Review study about health consequences of phytoestrogens, which mostly occur in soy (English, 2010) varied and balanced. Someone drinking 2 litres of soy milk, eating 2 portions of tofu and 500 grams of soy yogurt a day should not complain about the consequences of a one-sided nutrition.

Conclusion: Tofu and seitan fulfil their main objective of providing us with protein in the same way as bacon and beef.

Consequently, tofu, seitan Seitan is pure wheat that is most widely used as a meat substitute in Japanese and Buddhist cooking. To make it, the wheat has to be »washed« for a long time. Its hard consistency means it can be used in much the same way as meat or tofu. and all attempts to make sausages meatless are »unnatural«.

But what is »natural nutrition« anyway? A question to which Aztecs, Inuits, Neanderthals or Aborigines would all have provided different answers. For some it would have been fish, others corn, potatoes, nuts or roots. Most food we eat today didn’t start to play a part in our nutrition until the advent of farming around 10,000 years ago. The fact is that for the majority of human history, meat did not play a key role in calorie intake.

In these countries, dishes without any animal-based ingredients aren’t labelled as »vegan«, but have an inherited place on the menus of traditional restaurants. Tofu and meat are often found in the same dish, and why not? Both are good sources of protein, and after all, potatoes and carrots are also cooked in the same soup.

Conclusion: There is no such thing as natural nutrition. But tofu and seitan have long traditions.

4. »Rainforests are cleared for your tofu.«

This accusation is not always true, because part of the soy used in tofu production – especially organic crops – comes from southern Germany and Austria.

What is all too often true, however, is that most soy is imported from Import statistics from the »Verband der ölsaatenverarbeitenden Industrie« Germany (German, 2016) Brazil and the US where many agricultural issues come together. Genetically engineered varieties We will be looking at this issue soon! are grown on areas of land where rainforests have been cleared, and are protected from insects and disease through the use of pesticides.

That in itself is a case for eating more tofu, which compared to meat production, only requires a fraction of the resources to put a good portion of healthy proteins on the table. A kilo of soy could be fed to a pig, which also needs a lot of other food to develop around 500 grams of muscle and fat, Both pork and tofu have around the same amounts of protein and fat contents. or it could be turned into a kilo of tofu. As things stand, the vast majority of the harvest ends up in the feeding troughs for pigs, chickens and cows.

Tofu, compared to meat production, only requires a fraction of the resources. And because the global appetite for meat will continue to grow, forests will continue to be cleared, making a major contribution to global warming. But if more tofu was eaten than pork, the areas where soy is currently cultivated would also be sufficient in the future. And because animals don’t only eat a lot, but also produce methane gas, a single piece of steak creates many times The exact value is connected to the amount the animal eats and what is factored into the equation. Without deforestation you land at about 13 kilograms of CO2 per kilogram beef, while the same amount of tofu causes about 1.7 kilograms of CO2. Counting deforestation in, beef accounts for about 26 kilograms of CO2. more greenhouse gas emissions than a piece of tofu.

Conclusion: Soy causes problems. But there are many more hidden in meat.

Whether or not veggie sausages are too expensive, is relative. What is true, however, is that they are often more expensive than meat ones. For people who have to be very careful about how they spend their money, making the switch is barely an option.

The question is: why are meat sausages cheaper? Producing a kilo of tofu takes less time, labour and raw materials than a kilo of meat, which means the costs ought to be far lower.

That the opposite is the case has two reasons. On the one hand, the meat industry is The meat atlas contains a lot of information on the meat industry (2013) highly efficient. Thanks to the vast production volume, special breeding and highly automated processing with few, poorly paid workers, every unnecessary cent is saved.

But that alone would not suffice to keep the price of tofu down if the meat industry were not subsidised. The most important points where public money is poured into the sausage:

Conclusion: Some replacement products are actually more expensive, because they receive less funding than animal products. If all this was reflected in the price, the picture would suddenly look radically different.

This article is part of the project »The solutions lie in Germany«. In the project, »Global Ideas« by the Deutsche Welle and Perspective Daily present solutions to climate change within 3 steps, heading towards the 23rd climate change conference in Bonn in November 2017.

Step 2: »Green start-up scene – These German Start-ups will make your life easier« on Perspective Daily and »Engineering the climate — is it a good idea?« on Global Ideas. 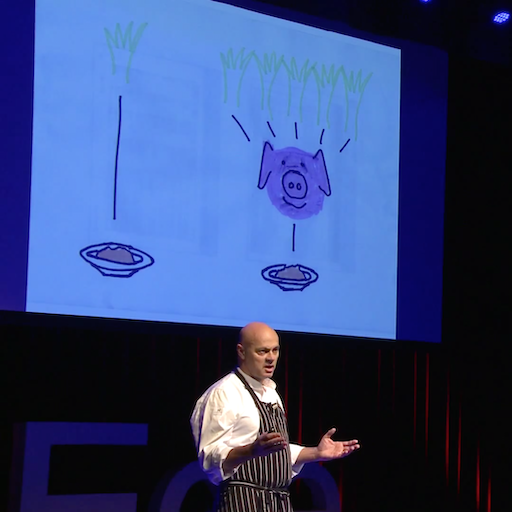 I am a vegetarian butcher

In this TEDx Talk the »vegetarian butcher« Jaap Korteweg explains why he slaughters plants instead of animals.